THE BLACK STILETTO is shipping! Official publication date is September 5, but Amazon is already fulfilling orders and the book is trickling into retail markets. If your local bookseller doesn’t have it, please ask that it be ordered. Or you can buy it right here. The e-book editions should be available (Amazon Kindle, B&N Nook, etc.) on the publication date or a couple of days later, so keep checking the websites.

Finally! Originally supposed to be published in 2010, Raymond’s pulp adventure novel HUNT THROUGH NAPOLEON’S WEB (written “with” fictional character Gabriel Hunt) is hitting stores on August 8. It’s been available as an e-book for several months, but the print edition is now out in trade paperback from Dorchester. Each book in the Gabriel Hunt adventure series is written by a different author—HUNT THROUGH NAPOLEON’S WEB is Hunt’s sixth escapade (but they can be read in any order). Buy from Amazon: Paperback | Kindle ebook

THE BLACK STILETTO has received a *starred* review from BOOKLIST, calling it “prime escapism”!

In anticipation of the publication of THE BLACK STILETTO in September, a FREE Black Stiletto short story has been made available.

THE BLACK STILETTO’S AUTOGRAPH is the story of one man’s lucky night in New York City, 1958… when he and others experienced more than just a sighting of the legendary Black Stiletto! 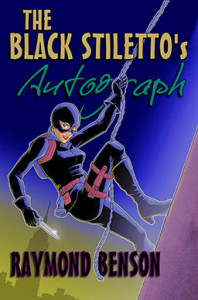 The story is available in all digital formats—PDF (best for PC), Kindle, Nook, Apple… go to—

—over at Smashwords.com and choose the format you want.

THE BLACK STILETTO continues to generate buzz. If you haven’t already, check out the official website at The Black Stiletto. Watch the video trailer and find other cool stuff. Also please go to Facebook and “Like” her fan page!

HOMEFRONT—THE VOICE OF FREEDOM hits the stores on January 25! Raymond has penned with John Milius (co-screenwriter of APOCALYPSE NOW; writer/director of THE WIND & THE LION, RED DAWN, CONAN THE BARBARIAN, and others; and co-creator/writer of HBO’s ROME) this prequel to THQ’s upcoming videogame HOMEFRONT. It is an apocalyptic story set in the near future in which Americans must fight a war on their home turf. Readers do not have to be gamers or familiar with the videogame—it is a stand-alone novel that any thriller-lover will enjoy.

BOONDOCKS FANTASY—Edited by Jean Rabe and Martin Greenberg, is on sale now! This collection of fantasy, horror, and sci-fi tales all take place in rural locations (“boondocks”). Raymond has contributed a short story entitled THE DEVIL IS A GENTLEMAN, about an unorthodox (so to speak) private eye in a small West Texas town. Available from DAW Publishers. 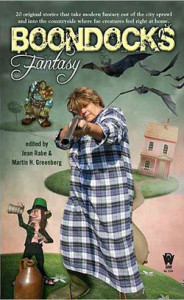